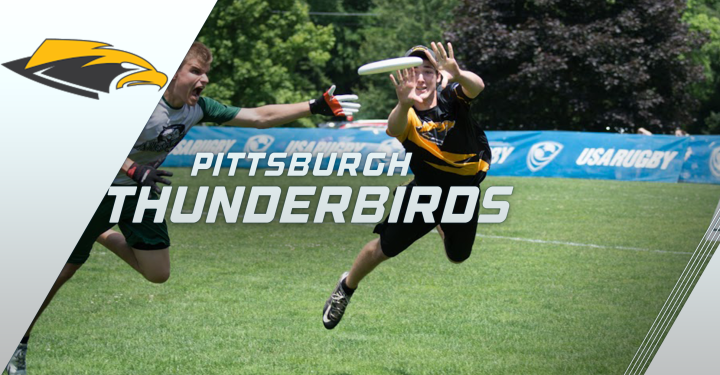 Madison Heights, Michigan – The quest to obtain a playoff spot in the American Ultimate Disc League’s Midwest Division continues for the Pittsburgh Thunderbirds (5-4-0) on the road Saturday, July 6, when they clash with the Detroit Mechanix (0-10-0) at Bishop Foley Stadium. They meet on the field for the opening pull at 4:00 p.m. EDT.

Head Coach Pat Hammonds’ flight crew wrapped up the home part of the 2019 schedule Saturday, June 29, with a 23-20 loss to the Indianapolis Alleycats (7-3-0) at JC Stone Field. The T-birds finished with a 4-2 mark at the North Park complex.

Max Sheppard, one of Pittsburgh’s four co-captains, spoke about the game with Evan Lepler on the league’s site. He commented, “The turning point was probably Nick Hutton’s in-cut D that led to a shift in momentum for Indy. They continued to pressure us very well and then played consistent offense on a turn.”

The Edinboro University product leads the Black and Gold flock with 38 goals and shares the disc well with others by being second in assists with 31. Thomas Edmonds has the most helpers with 34 and is second in scores with 18.

Thunderbirds in-game host Bill Holman and public address announcer Matty Frances ofter refer to Anson Reppermund as the Air Traffic Controller of JC Stone Field for his excellence on defense. The veteran defender is the leader in blocks with 16. Alex Thomas, Sam VanDusen, and Sheppard share the second slot with seven stops apiece.

My Player to Watch for Pittsburgh this week is Jimmy Towle, who is third with 16 goals and sixth in catches with 120. He matched Sheppard’s output with four goals in the T-birds 17-12 win on Saturday, June 1, against the Mechanix.

Last week against Indy, the member of the Thunderbirds who contributed the most “hockey assists” – the pass that leads to the Goal Thrown pass (assist) for the score: Edmonds with four while Jonathan Mast and Towle delivered three each. It is an unofficial stat I calculate, not the AUDL.

= READ: Andrew Gardner – What Needs To Happen For The Thunderbirds To Make The Playoffs? =

Detroit’s last contest was cut short by thunderstorms after halftime as they lost on the road to the Chicago Wildfire 12-6. The last time the Mechanix assembled single digits on the score sheet was Saturday, May 13, 2018, when they lost to the Radicals 37-8 in Madison.

Austin Riegel is my player to watch for the Mechanix. The first-year player from Ohio Wesleyan University is third in goals with 15 over nine matches. Andrew Sjogren is the leader of the pack with 25 goals while All-Star Game representative Joe Cubitt has the most assists with 27 and blocks with nine. Jordan Kinde owns seven blocks and 19 assists.

My Prediction: I think the Thunderbirds bring their road record even at 2-2 with a 21-17 triumph in the Great Lakes State. If you join the Black and Gold in their travels, here is where can purchase your seats online.

Other Voices: Staying on top of the ultimate odds at the sports wagering website mybookie.com, the bookmakers have the visiting Thunderbirds as -6.5 favorites with the over/under dropping in at 37.5.

Checking in with the flying disc patrol at Massey Ratings, they like the Birds of Thunder to put together a 22-16 victory against the Men of the Motor City.

Weather: The outlook from the radar sentinels at weather.com is mostly cloudy skies for Saturday morning, followed by partial clearing in the afternoon. The projection is a 20 percent possibility of showers. Look for the winds to come out of the north at five to 10 mph. Click on the link for any updates.

Tune In: Keep tabs on every hammer throw by the Black and Gold on the road by going online, and selecting the T-birds as your preferred team on AUDL.TV (subscription service).

Next Up: Pittsburgh keeps their bags packed as they head to Illinois Saturday, July 13, and face-off against the Chicago Wildfire (7-3-0)at Langhorst Field. The opening pull on the campus of Elmhurst College is 6:00 p.m. CDT.

From The AUDL Channel On YouTube.com – 2019: Indianapolis AlleyCats at Pittsburgh Thunderbirds — Game Highlights…

Top Of The Article Photo Courtesy Of The Pittsburgh Thunderbirds