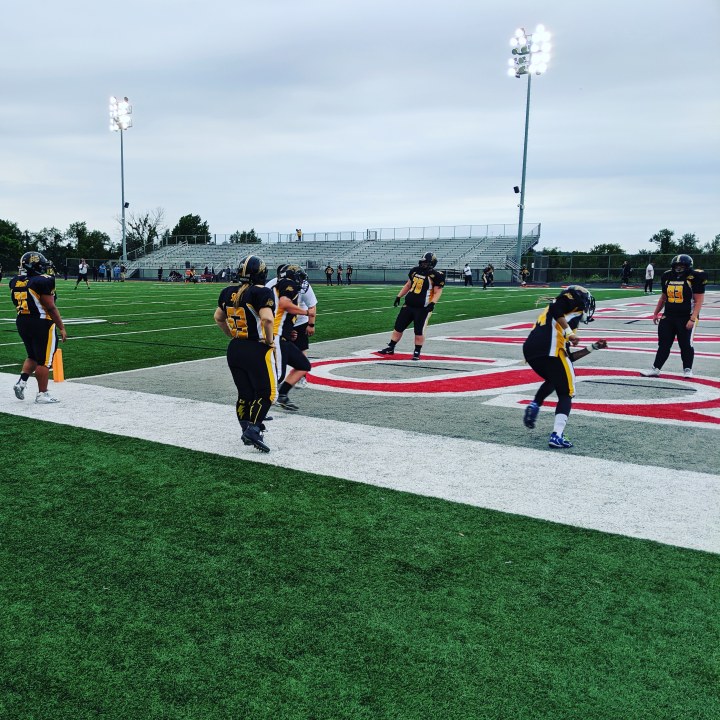 Imperial, Pa. – With the swing of placekicker Sarah Monte’s leg in overtime, the Detroit Dark Angels (8-2-0) derailed the Pittsburgh Passion’s (7-3-0) chances Saturday, June 29, to bring another Women’s Football Alliance National Championship back to the City of Bridges, 34-33.

Following NCAA overtime rules in the WFA, Detroit on their possession powered the ball from the 25-yard line to the three and turned to Wayne State University product Tatyhana Pauling to get into the end zone. The 5-foot-7 running back charged behind the left guard and got the six for the Black, Crimson, and White. Monte sealed the triumph with the extra-point at West Allegheny High School.

Pittsburgh won the toss at the beginning of the overtime, and on their possession, it was quarterback Angela Baker who with the pocket collapsing around her went straight up the middle from two yards out to score for the Black and Gold. The two-point conversion pass sailed out of bounds.

Before the fateful overtime, Detroit claimed a 27-21 lead at 1:34 in the fourth when quarterback Maggie Hudkins out of the shotgun formation at the 20-yard line connected with Kaci Cunningham at the Passion four-yard line and she went in for the score uncontested. The snap for the extra-point was short of the holder and the kick no good.

Baker got the Black and Gold faithful on their feet with just 17 seconds left in the contest as she rolled left and threw a four-yard touchdown strike to Jana C. Meister at the goal line and the third-year wide receiver leaned back into the end zone. The two-point conversion was over-thrown.

The 5-foot-4 signal caller collected the only touchdown of the first half on a five-yard run around the left tackle at 4:16 of the second. Rookie linebacker and kicker Franki Kilmer made the point-after attempt.

Arielle Smith picked up her second postseason rushing touchdown for the Women of Steel on a two-yard burst at 13:11 in the third quarter. Baker found Krystal Cozzo in the far right corner of the end zone with her pass for the two-point conversion. Pittsburgh worked their way onto the score sheet with 29 seconds left in the third when Baker capped off a 96-yard drive with a 14-yard toss to Meister in the back of the end zone. It was the longest drive in Passion history.

I spoke with veteran Passion broadcaster Chris Shovlin after the match. He commented, “It was an intensely physical game. When Pittsburgh lost [defensive tackle Kaitlain] Neidermeyer and Kilmer to injury, Detroit was able to take advantage of them not being in the line-up. Obviously, with Frankie being the placekicker, that hurt the Passion double. Detroit’s blitz really cramped Pittsburgh’s offense as well. The Passion tried to fight through it, but Detroit put together a tough game plan.”

Box Score Bits: Baker finished the evening going 13-of-26 passing for 205 yards and two touchdowns. She kept drives alive with her feet as the Slippery Rock University product owned 86 rushing yards on 14 carries and two trips to the end zone. Ebony Montgomery, who missed the regular season due to injury, went four-of-five passing for 38 yards against the Dark Angels. Baker gathered all four receptions.

Dark Angel defensive backs got tired of seeing Meister as she had a personal best seven catches for 102 receiving yards and the first two postseason touchdowns of her career. Ellisyn Mularski added two receptions for 68 yards while Cozzo hauled in a pair of passes for 22 yards.

Helping to build respect for the Black and Gold ground attack was Smith who along with her touchdown, delivered 44 yards on 11 carries. Kia Foster chipped in eight carries and 41 rushing yards.

Coming through for head coach Teresa Conn’s defense was Hannah Daman from her linebacking position with 11 tackles and one forced fumble. First-year defensive back Diamond Rodgiuez tallied eight stops and two fumble recoveries. Before leaving the game, Niedermeyer assembled seven tackles and a forced fumble.

Another defensive back, Rebecca Ehrgood returned an interception 29 yards for the Passion She and defensive end Kim Zubovic placed five tackles apiece on the stat sheet. The Passion is 16-9 all-time in playoff meetings.

Last Looks: The third down and long watchers at Massey Ratings moved the Passion down one notch in their survey to wrap up the 2019 campaign in sixth place. The Dark Angels ascended five slots to fifth.

Gridiron Clipboard: The Detroit Dark Angels next stop is Marv Kay Stadium to clash with the St. Louis Slam (10-0-0) for the WFA D-2 National Championship Saturday, July 13, in Golden, CO. The Slam shutout the Mile High Blaze (8-2-0) 41-0 in their playoff contest. This matchup at the Colorado School of Mines gets underway at Noon.

First Two Photos In The Article By Larry N. Snyder – All Rights Reserved