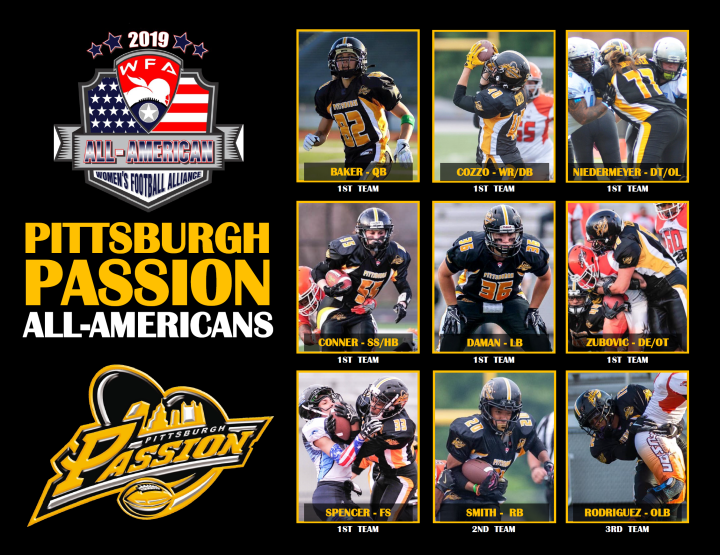 Pittsburgh, Pa. – With the regular season wrapping up last weekend, the Women’s Football Alliance on Friday, June 7, published the roster of players named to their National and American Conference’s All-American Squads. The Pittsburgh Passion (6-2) placed nine athletes on the National Conference list. The WFA has over 2100 players spread across the country on 62 different teams in 2019.

The WFA 2019 National Championship weekend is Friday, July 12th and Saturday, July 13th, at Marv Kay Stadium at Campbell Field on the campus of the Colorado School of Mines in Golden, Colorado. The Home of the Orediggers is an NCAA Division II newly renovated facility.

For the Passion, the quartet of Devon Conner, Tenisha Spencer, Arielle Smith, and Diamond Rodriguez are making their initial appearance as All-Americans. Here are all nine of the players picked from the Steel City.

Gridiron Clipboard: All of the athletes on the 2019 WFA All American Teams in the National and American Conferences can be found here online.

Next Up: The Black and Gold confront the New York Wolves (5-3) in the opening round of the WFA playoffs Saturday, June 15, at West Allegheny High School’s Joe P. DeMichela Stadium. This rousing matchup gets underway at 7:00 p.m. EDT. Visit the team website to get your tickets.

Anyone not able to be at the contest can keep an eye on all the first downs and scores on the Passion Twitter page (@pghpassionFB) or the ScoreStream App.