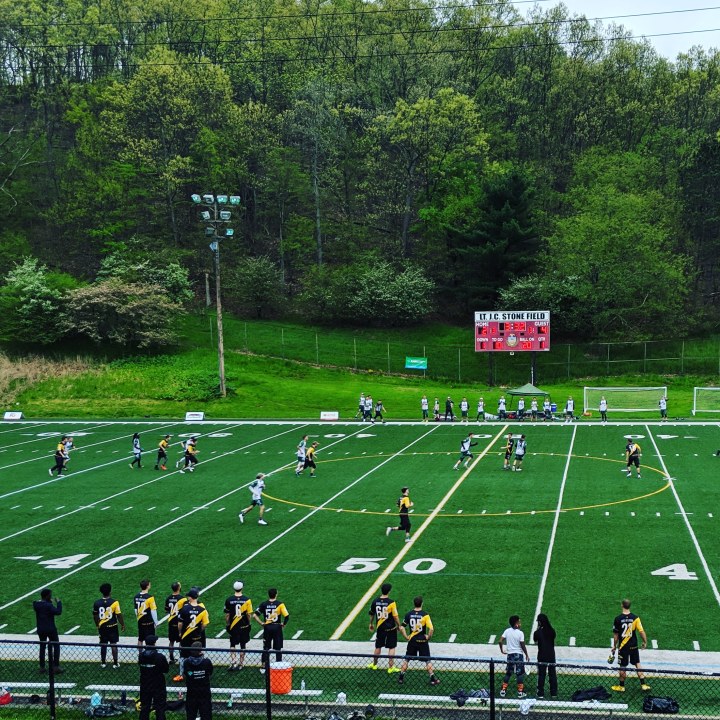 Allison Park, Pa. – The Pittsburgh Thunderbirds (0-3) seek to extinguish the Chicago Wildfire (2-0) in the second of their four-game homestand on Saturday, May 11, at JC Stone Field. The American Ultimate Disc League adversaries from the Midwest Division get together at 6:00 p.m.

Three games into the season and Max Sheppard is your early leader with 11 goals and 95 minutes played for the Black and Gold. Every team Pittsburgh takes on, they need to keep an eye on Thomas Edmonds who is in the clubhouse with nine assists, 136 catches, and 152 completions.

Anson Reppermund is the key on defense with six blocks while Sam VanDusen is averaging a hang time of 6.62 seconds on his pulls. Head Coach Pat Hammonds can count on Alex Thomas, Dylan Best, Jonathan Mast, Jimmy Towle, Chris Graber, and Owen Watt for substantial contributions each week.

Mark Fedorenko talked with Evan Lepler on the AUDL website about the Thunderbirds, “Our goals going forward are to continue developing offensive chemistry and reduce our tendency to give up a break run in one quarter. On the defensive side, it is to generate more offensive efficiency after the turn to help us go on defensive runs.”

T-birds general manager Andrew Gardner reported on the team’s Facebook page, Tyler DeGirolamo is back and takes the field this Saturday against Chicago at JC Stone Field. DeGirolamo last played for the Black and Gold in 2017. Over his 24 games in a Thunderbirds uniform, he has put up 139 assists, 101 goals, 27 blocks, and a 216 plus/minus. DeGirolamo owns Pittsburgh team records in assists in a single game with 15, and single-season assists with 86.

BREAKING: Tyler Degirolamo is suiting back up for the @PGHThunderbirds this weekend after not playing since 2017

Chicago head coach Dave Woods spoke with Adrian King on the league website about his teams’ success last week in their home opener, a 23-17 victory over the Minnesota Wind Chill, “We had almost all of our guys available and distributed points very evenly. This gave us energy late in the game, and our offense went on a big run.” The Blue and Orange are averaging 24.5 points per contest, and they are tied with the Madison Radicals for first in the Midwest Division standings.

Pawel Janas has a trifecta for the Wildfire, leading the squad with 12 assists, 122 completions, and 113 catches. Jack Shanahan finds his name at the top of the box score with six goals. The quartet of Dan Miller, Mathew Rehder, Drew Swanson, and Jeff Weis own five goals apiece. Making sure the opposition stays off the score sheet, Rehder also helps on defense with four blocks.

My Prediction: I think this meeting could come down to who has the disc last in the fourth quarter. I predict the T-birds claiming their first win with a final score of 21-20. You and your family can obtain your seats online here.

OTHER VOICES: Adam Ruffner positions Pittsburgh down two slots to No. 19 in the AUDL’s Power Rankings. He moves Chicago up one from seventh to sixth this week. Ruffner is impressed by the improved play of the Blue and Orange’s Ross Barker. He wrote, “Barker is becoming one of the most well rounded players in the league, transitioning from his former role as offensive playmaker to defensive general, orchestrating the Wildfire counterattack.”

Matt Rezin joins the chorus with his two players to watch on the league website. He likes Chicago’s Barker and Pittsburgh’s DeGirolamo. Either player could contribute the game-changing play.

Keeping tabs on the AUDL, Charlie Eisenhood and the staff at Ultiworld.com has Chicago moving up two slots to sixth place this week in their Power Rankings while Pittsburgh remains at No. 19. Tanner Jurek shared his observation of the Wildfire at Ultiworld.com, “Chicago looks athletic in a way that few teams in the Midwest have looked in the past few years.”

Heading over to Massey Ratings, the Wildfire comes in at No. 10 in their survey. The Thunderbirds nest at No. 20 just ahead of Detroit and Ottawa. They also see the matchup being a close one with the Boys from the Windy City eking out a 22-20 triumph.

WEATHER: According to the humidity watchers at weather.com, the forecast is mostly cloudy skies with a 15 percent chance of rain. The high to begin the contest should be 63 degrees and a low of 58 by 9:00 p.m. Winds out of the north to northwest at five to six mph.

NEXT UP: The home cooking continues as the Black and Gold welcome the Detroit Mechanix (0-3) Saturday, May 18, to the City of Bridges. Everyone can be part of the opening pull at 6:00 p.m.