The 26-year-old striker from Kingston, Jamaica, scored two goals, notching a brace, in the Pittsburgh Riverhounds SC 3-0 victory over the New York Red Bulls II on Saturday night. Highmark Stadium was bustling with 3,652 fans in attendance.

Brett said that when he gets a chance, scoring is what he makes of it. Brett said that in big games like the Red Bulls II match up Pittsburgh aims to “do the right things.”

“The only thing coach has been stressing about is trying to be good at both attacking and defending,” Brett explained. “He knew this was a good team, so he had to make sure we were prepared for this game.”

That “coach” would be Riverhounds SC Head Coach Bob Lilley. After the match, Lilley said he was fairly happy with the result, but “not necessarily thrilled with the performance.”

“We can work on it and hopefully get it better for the next game,” Lilley said. “I’m disappointed how we defended as a team, but it was a good result. Guys worked in practice this week and got the tactics right.”

Before Pittsburgh could score a goal, midfielder Ben Zemanski was escorted off the pitch with an unspecified injury. Taking his place was fellow midfielder — and Riverhounds SC captain — Kevin Kerr.

Kerr helped set up the opening goal from Brett in the 27th minute. On Brett’s second goal, scored in the 54th minute, Kenardo Forbes set up Brett for the tally past Red Bulls II goalkeeper Scott Levene.

The final goal of the match was scored by Brett’s fellow Jamaican striker Romeo Parkes. Parkes scored the goal in the 65th minute off an assist from Ray Lee, finishing the play with his head. After the match, Parkes admitted that Lilley had “begged” him for the past four months to score a goal with his head.

Parkes also called it a “good feeling” partnering up top with Brett.

“We’ve been playing together since youth days in Jamaica, so to come here and play with him is a really great feeling,” Parkes said.

The victory wasn’t the only celebration for Pittsburgh.

In the 74th minute, defender Joe Greenspan made his anticipated season debut at Highmark Stadium. Greenspan had been out for months with a calf injury and made his way onto the pitch Saturday night, reliving Brett from his duties.

After the match, Lilley said that having Greenspan back will improve the defense.

“I think he’s going to help us,” Lilley said. “At the beginning of the season, we thought he’d be a big piece. I thought he looked good when he got in there. He stepped in, won some tackles and was good in the air. He doesn’t have all his match fitness and game sharpness, but he’s been training really hard with his rebab.”

Lilley said that he thought Greespan was “good” against New York. However, the head coach also touched on his absence, saying that other players were playing well during Greenspan’s injury.

“There’s still going to be competition for spots,” Lilley said.

Pittsburgh is on the road for the next two matches to finish out the month of June.

The team will travel to face the Charleston Battery at MUSC Health Stadium in South Carolina on Saturday, June 23. The match will air on the Pittsburgh CW channel. Kick off is slated for 7 p.m.

June finishes with a mid-week match on Wednesday, June 27, against Louisville FC. The Kentucky-based club is currently the USL defending champions.

The match will be held at Louisville Slugger Field. Kick off is scheduled for 7 p.m.

Rachael McKriger is a sports journalist covering the Pittsburgh Riverhounds SC for the Pittsburgh Sports Castle. She also covers Sounders FC and the National Women’s Soccer League for the Last Word On Soccer. She is a contributor to the Women’s Premier Soccer League website and the owner of McKriger Photography. 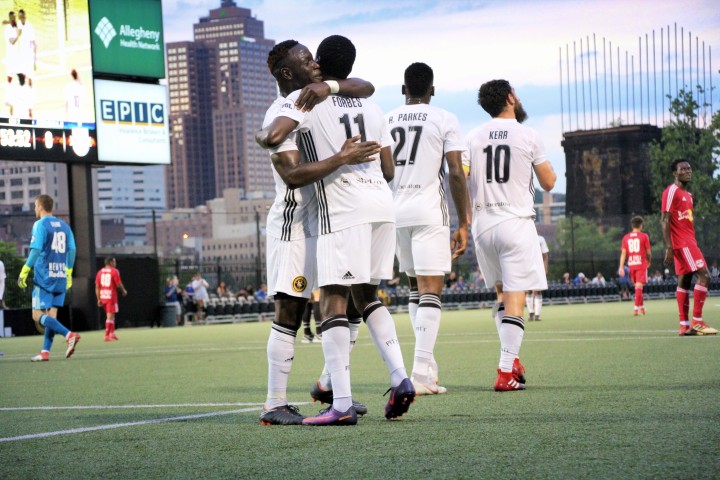 All Article Photos By Rachael McKriger – All Rights Reserved