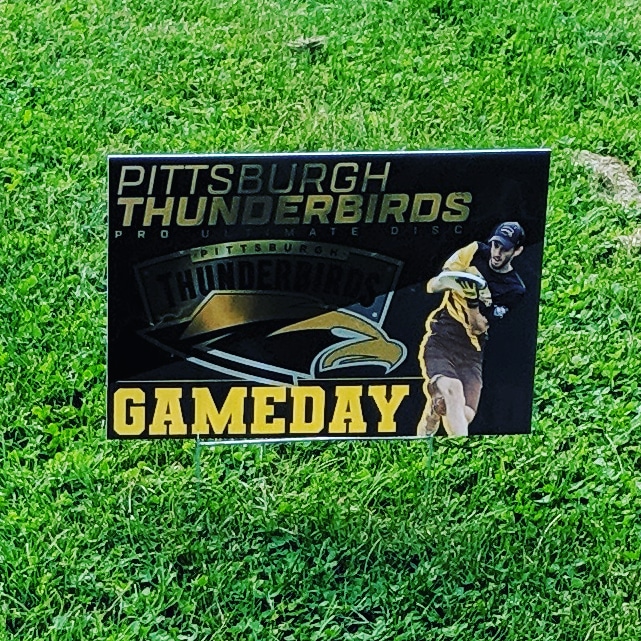 Pittsburgh, Pa. – For their next two contests, the Pittsburgh Thunderbirds (1-7) confront squads from the American Ultimate Disc League’s East Division. They battle the DC Breeze tonight at Arthur J. Rooney Athletic Field. The first pull on the campus of Duquesne University is 6:00 p.m.

Kenny Furdella supplied five goals last week in the 33-21 loss on the bluff to the Minnesota Wind Chill while Mark Fedorenko contributed four assists to the score sheet. Jimmy Towle provided three blocks, and Jonathan Mast put up 40 completions. Pittsburgh was on the wrong end of the total team turnovers, 34-21. The Boys from the North Star State owned the edge in blocks, 23-10.

Andrew Gardner, T-birds general manager talked with me about some of the players breaking out this season including Owen Watt, “Owen has just been phenomenal for us this season. He’s played in every game this season and been a key cog of our O-line, making good decisions and fitting seamlessly with our team. There’s always a ton of pressure on the O-line as they are expected to score 100% of the time, but Owen seems to embrace that pressure and has really settled into a reliable offensive weapon for the T-Birds through the half-way point of the AUDL season.”

“There are so many other players on this team though that have just absolutely broken out. Alex Thomas is playing incredible defense, Pat McMullen is controlling the D-line with his suffocating handler defense and handler movement, Kenny Furdella stepped up and replaced injured Jon Mast this past weekend on the O-line and played phenomenally…the list is really endless. It’s just a matter of practice and playing time for us as a team to put it all together.”

From Twitter – A Look At Pittsburgh’s Active 20-Man Roster:

The Boys from the Nation’s Capital arrive in the City of Bridges with a 29-21 triumph last week at home against the New York Empire (3-2). While the Breeze is 3-4-1 overall, they claim a 0-3-1 mark on the road.

Looking at head coach Darryl Stanley’s crew of 20 active players, 18 have either recorded a goal or an assist so far this season. Eric Miner led the Blue, Silver, and Red with five goals in the victory over the Empire while Lloyd Blake had 39 completions. Joe Richards tallied three of the team’s 13 total blocks. DC registered 16 total turnovers to New York’s 24.

Two members of the Breeze are former Thunderbirds…

Welcome back to the 'Burgh Marcus Thaw and Xavier Maxstadt! pic.twitter.com/4ixBKcwtoy

Per Evan Lepler on the AUDL website, 57.7 percent of contests are being decided by three points or less across the league in the first six weeks of competition. I asked Gardner if he thought parity is part of the ultimate disc landscape. His response, “Without question, every match-up is a toss-up. It’s great for the League and it makes it exciting from a fan perspective. Nashville recently grabbed a win against Austin, snapping a 666 day span without a win. Detroit played us incredibly tough to start the year, dropping that contest by only 1. There’s a lot of uncertainty in the League in terms of final standings and that can only be a good thing in the League. Unfortunately for us, the stiffer competition makes it harder for us to break into the playoffs each year, but we welcome the challenge.”

My Prediction: I am thinking the match this evening could be close with the Black and Gold obtaining a 21-20 win. You can choose your prime seats online.

Other Voices: The disc watching gang at Massey Ratings places the Breeze fifth in their survey while the T-birds slow start has them listed at No. 22. They like the DC bunch to grab a 29-15 victory.

Weather: Checking in with the sky observers at weather.com, the prediction is mostly cloudy skies Saturday with a five percent chance of showers. The high to begin the match should be 78 degrees and a low of 75 by 9:00 p.m. Winds out of the north at four to eight mph.

Next Up: Pittsburgh travels across the turnpike, Saturday, June 9, to face Keystone State rival, the Philadelphia Phoenix (2-5) at AA Garthwaite Stadium at 6:30 p.m.

From The Clipboard: Check out Sunday’s Supercell Mixed Ultimate Disc game between the T-birds and the Breeze here at Top Of The Incline Sports.

Looking Back At TheAUDLChannel On YouTube.com –  2018 Top 10 Plays – Week 6 Include Pittsburgh’s Sam VanDusen at No. 6 and DC’s Rowan McDonnell at No. 8…